I recently had a problem in my SCOM test environment with a management pack, which already should have been removed, but really wasn’t.

The situation was this:
I tested the Solarwinds Orion Management Pack which also required a connector to be installed on the management server – which makes my skin crawl. After testing this management pack I came to the decision to remove it again. I didn’t like that I should manually add new devices in the connector wizard and it also created alerts with the same name and I could only see the real problem in the description – more shivers over my back. I uninstalled the connector through Add/Remove Programs and deleted the management pack in the console. The problem was that the Solarwinds.Orion.SCOM.Library still stayed in the database. It was not deleted! Strange. Have not seen this before.

So I tried to use PowerShell. I opened up the OpsManager Shell and ran the Remove-SCOMManagementPack cmdlet as shown in this Picture:

But it timed out after 30 minutes.

In the OpsManager event log on the management server I had these events (4508):

Which showed me that the MP really still was alive, but the assemblies of the connector were missing. Sure, because I uninstalled it.

My console was fozen and I could only kill it.

I contacted my SQL admin colleague and she found blockings on the database:

After an hour or so, I asked her to kill these tasks. I had no clue how to get this crazy MP out of my environment. I was glad that it was only my test environment – one more reason why I highly recommend to have that!

Then I remembered that I met Vlad last time at MMS. So I contacted him and he was so kind to forward my request to his colleagues. They helped me out. Here is what I had to do:

This still took 45 min to finish but it worked!

Be careful with this solution because it is not officially supported from Microsoft and don’t forget to perform the backup before running the queries. I also would recommend to do this out of normal Business hours if you Need to run it on a production Environment because it influences the management Server Performance.

The idea behind that is that there are systems which cannot be patched (and rebooted) during normal patch windows because the application owners need to control the outage times by themselves. They only know when production can handle a server outage. With Service Manager they can follow the ITIL Standards and create a Change Request, select a SCCM Collection with its Servers and the Software Updates to be applied. The Change Request will then call an Orchestrator Runbook and implement the Patches on all Servers in the given Collection. 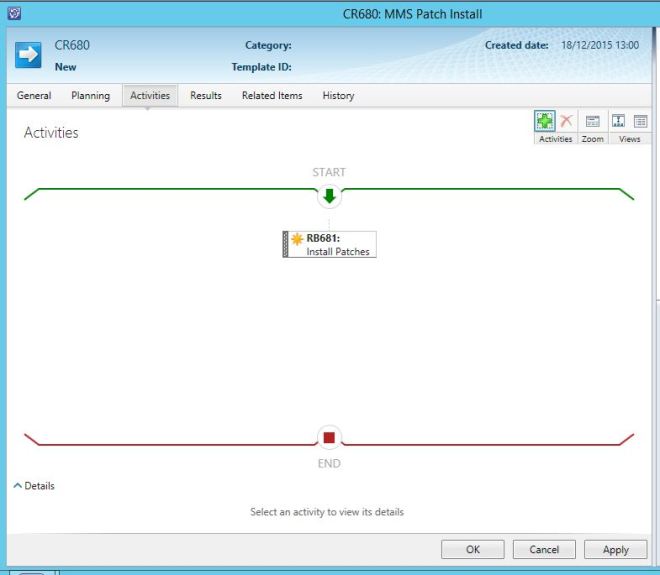 The following screenshots show the runbooks which are used for this solution.

Get CR Details (writes all necessary CR information to the DB) 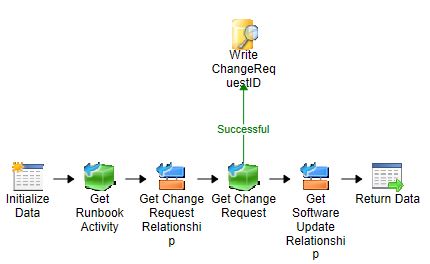 Split Patching by Server (gets all Servers within the Collection)

Split by Patch (reads all updates from the DB)

Check Updates (checks if the Patch is available on the machine)

Install Update (installs the update on the machine)

This YouTube-Video shows you the process in action.

The complete solution can be downloaded here.

If you never heard of MMS or Midwest Management Summit then I will try to help with that. MMS is a conference, which started in 1998 and was initialy more a user group meeting, the main focus was SCCM. That conference ran so well that Microsoft took it over and dropped it after 2013. So the Minnesota System Center User Group restarted the initiative 2014 and now MMS is in its second year again. The difference between the conference held by Microsoft and the one from the user group is that it is smaller (which is really positive) and closer to the customer. You can feel that it is not a Microsoft promotion but a real user group event. The people have time to talk to each other and they use the chance. Speakers are close and the fact that the sessions are not recorded also help to avoid fears. So besides the System Center Universe conferences this is the conference you should attend specially when you are based in the US.

MMS 2015 was held in Minneapolis (Minnesota) between Sunday, Nov. 8th, and Wednesday, Nov. 11th, at the Radisson Blu Mall of America. The  location was fantastic. Great hotel and I do not need to mention the mall nearby ;-). There were some pre-conf sessions on Sunday and also the welcome reception, where attendees and speakers could meet first time.

It was my first time speaking and it was a pleasure to do that during this conference. The technical support was very good, they were in the room 10 min before the session started, to fix things. The organization and communication before and during the conference was great. The only negative thing which was mentioned by nearly every speaker was the bad wifi connection.

I had two sessions:

To my co-presenters: you were wonderful! We rocked it ;-).

I attended most of the SCOM sessions and also the early bird sessions for Data Center and Cloud Management and realized that all SCOM sessions covered different parts. So that was really good, not much overlaps.

I met a lot fantastic people and even the Jet lag did not reduce the fun we all had.

The next MMS will take place between May 17th and May 19th 2016 at the same place as this year. So add this to your schedule, perhaps you can meet some of us there.

Here are some impressions: 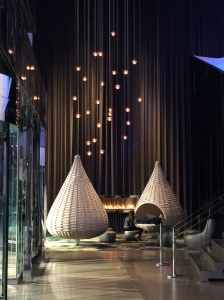 Entrance of the Radisson Blu

Steve, Rob and I 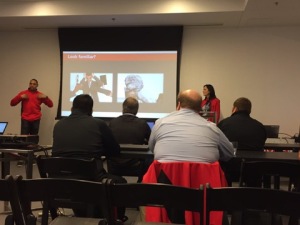 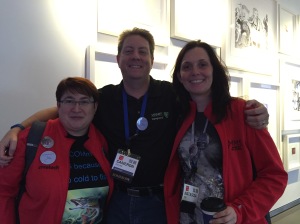 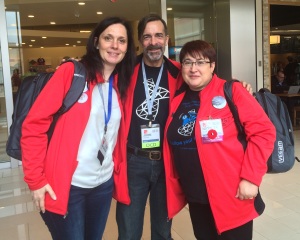 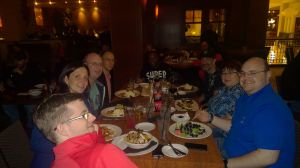 Final Dinner at The Crave

After SCU Europe 2015 I finally made it to install the latest version of Squared Up (2.1.x) in my development environment. There are already a lot great posts around about SquaredUp. Tao Yang is leading on that at the moment.

I really must say, I am amazed about how the product improved within the last year. It is very easy now to import/export dashboards, customize existing ones and create new rich dashboards. And there is a lot more to come, I already received some information about the next version ;-).

This week I played around with the SQL Query PlugIn and created two dashboards for my environment, which I want to share here.

I have taken this information in the past from SCOM reports, with SquaredUp you can see the data very fast and share that information with other teams easily.

Please be aware, that you need to change the database connection string in your environment.

(Here are more of my pictures)

System Center Universe Europe 2015 is over and I had to process a lot impressions. I did that in the picture above. It also should give you a glance of what happened at this conference.

The conference was located in Basel again and the three days (August 24th-27th) were packed with 4 parallel sessions each. The venue was great, good to reach and the WIFI was stable :-). There were around 420 attendees, 50 more than last year. So the conference is still growing.
There was a lot of great content about System Center, OMS, Azure Automation, Windows Server 2016, IoT, PowerShell, etc.
As System Center is not only connecting to on-premise but also Cloud ressources the topics spread over all related areas.

As I love technology my favorite sessions were: 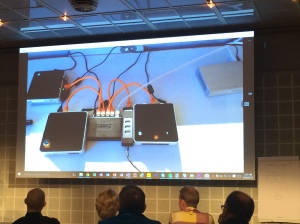 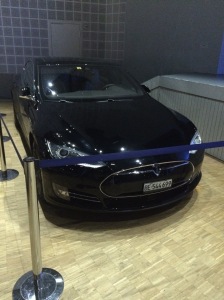 This year there were more SCOM related session – what I really liked, because this is still my main topic.
I want to highlight these sessions:

The “Ask the Experts” area has been extended this year and also “Early Morning discussions” have been added. So everyone had the chance to talk to people from the community and gather as much information as possible. The Networking Party and the Closing Party were two additional options to extend your social network. Sorry to everyone who missed me at the closing party, I was already overpowered by the information I had to handle from the three days.

I want to especially thank Marcel Zehner and all itnetX guys for the very good conference preparation and management and also a big thank to all presenters. I know that these conferences live from your work and that you spent a part of your life to prepare it.

A new System Center book is on the horizon which covers the very important reporting topic. It will be published Friday 27th. You can find the link to the book and more information about it on the blog of Steve Buchanan, MVP and technical reviewer of the book.

Why is this book special?

Reporting is essential in the System Center world. What is for example Sccm without patch compliance reports? But where can you find good information about how to design System Center reports besides searching the web? This book gives you guidance with easy to follow recipes and a lot of useful information about setup, report design and other options besides SSRS like PowerPivot.

A big thank from me goes to Sam Erskine, one of the authors, who had the idea for the book. He managed the publication from the beginning to the end and it is really his baby. He made it possible that I was a technical reviewer of this book, that I saw how it grew and I am proud as a nurse which helped to bring a baby to live, that I had a small part in it.